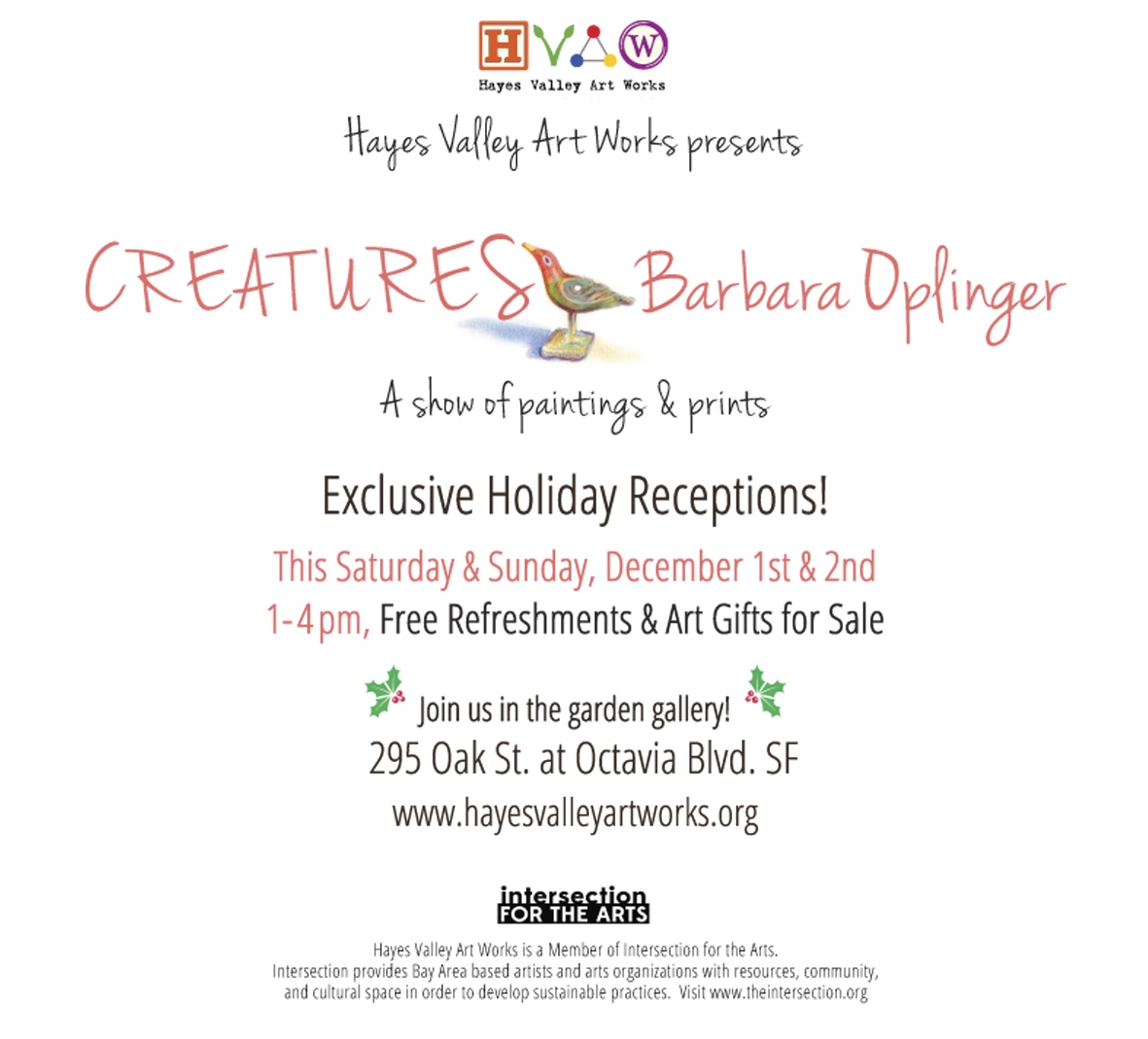 Join artist Barbara Oplinger this weekend for a special Holiday Reception for her exhibit, “Creatures: Paintings and Prints.”   Free refreshments, art and gifts for sale. 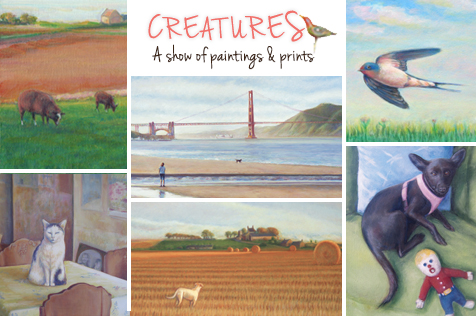 This event has been canceled due to poor air quality. We hope to reschedule this event for a later date. Please check back.

Hayes Valley artists will exhibit recent work in the “hidden” garden at Church of the Advent, 261 Fell Street, between Franklin and Gough Streets in San Francisco, on Saturday, November 10, 2018 from noon till 4 p.m.

Free admission, family friendly, and a great opportunity to meet friends and neighbors in beautiful Hayes Valley.  “Art In The Garden” is hosted by Hayes Valley Art Works and Church of the Advent.  For more information, contact: hvawsf@gmail.com.

October 31 4-6 pm! Trick or Treat through Hayes Valley! Pick up a map at Hayes Valley Art Works (Oak & Octavia) and follow the trail through the neighborhood to local merchants and residents! Goodies and raffle for grown ups too!

Hayes Valley Art Works presents “Creatures: A Show of Paintings and Prints” by Barbara Oplinger in our gallery.

Bay Area artist Barbara Oplinger brings her love and sensitivity for all animals – and the necessity of dogs in her life – to the canvas in this exhibit of recent work.   Her colorful paintings express devotion to all kinds of creatures with whimsy and metaphor. Barbara earned her BFA at the School of the Museum of Fine Arts at Tufts University. Her studies in painting, sculpture, stained glass and animation led to eclectic art commissions and a variety of employment, including mask maker for the Boston Ballet’s “Nutcracker,” clay sculptor for Grandmaster Flash’s “U Know What Time It Is” video claymation, and pictorial billboard painter. “Creatures” features images of animals she has known or admired.

René Yañez was an artist, curator and producer who lived and worked in San Francisco. A founder and former Artistic Director of Galería de la Raza, Yañez was one of the first curators to introduce the contemporary concept of Mexico’s Day of the Dead to the United States. Active as both a visual and performing arts curator, he  curated numerous exhibitions including “Chicano Visions: American Painters on the Verge.” Until his last day he remained a strong role model and vital cultural force in the San Francisco arts community.”

Rene’s stamp will be administered by his son and artist Rio Yanez.

“Passport is SFAC Galleries’ signature event that puts the art collecting experience in the hands of the general public! Local artists will be stationed in venues throughout Hayes Valley/Civic Center and Passport attendees can “create” their own limited-edition artist’s book by collecting original, artist-designed stamps in a customized “passport” notebook.

I want to go! How do I get a Passport?

Step 1: Purchase your passport for $25 here. Passports will also be available for purchase the day of the event at Passport Home Base (Patricia’s Green) and at Passport Outpost (SFAC Galleries). Only official Passport 2018 notebooks will be eligible to receive stamps.

Step 3: Follow the Passport map to local businesses where artists will be waiting to stamp your passport with an original artwork.

Step 4: Allow 3-4 hours to complete the route. Bring sunscreen and plan to shop and eat along the way!

HVAW Paint and Sip
Mix together:  wine + paint + friends =  Paint and Sip Night!
Join us for a delightful autumn evening of wine, paint, and friends at Hayes Valley Art Works!   We are in discussions with our merchant neighbor, San Francisco Wine and Cheese, to provide delicious wine.  We’ll provide the paint and supplies. You provide the fun and creativity and a memorable night!
We’re looking to start Wine and Sip on Tuesday or Wednesday evenings later in September …. date and time to be announced soon!  Let us know if you are interested in pre-registration for this event!

We’re hosting an affiliate event as part of @GCAS2018; find out about our Transformation Station. #GCAS2018 #StepUp2018 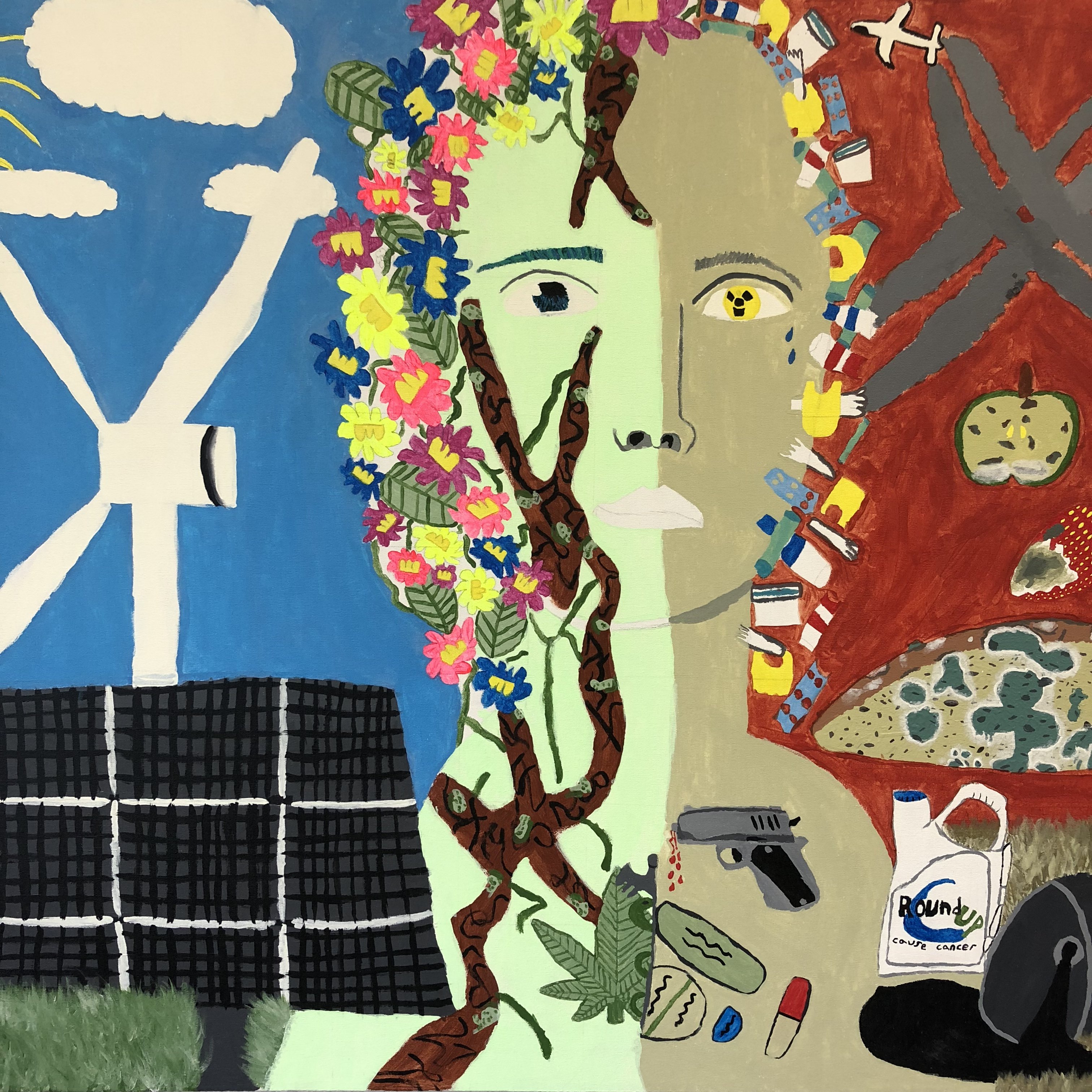 “Two Sides of Life”
Ashley Chimienti, Acrylic on Canvas
Hayes Valley Art Works presents “Protect and Resist: Art from The Arc of San Francisco.” The exhibit is a group show featuring the work of artists from The Arc San Francisco’s ArtReach Studios. The artists consider what the words protect and resist mean personally, connecting the creative process to a social issue each individual feels passionate about. Protect and Resist reflects various historical lessons, discussions, and collaborations surrounding the themes of art and activism. This focus on the intersection of personal expression and personal politics gives each artist the opportunity to explore ways to communicate complex political and social issues through striking visual forms, from poster art to large-scale paintings to mixed-media sculpture.

The center of this exhibit is the “Recycle Tree,” a large mixed-media installation that was conceived and designed by ArtReach Studios artists. As a group, they collaborated on a single idea that would reflect everyone’s mutual passion for protecting the environment while also resisting against the pernicious forces that threaten its health and longevity. The installation was hand-built from all recyclable materials and is a physical reminder that everything we consume has a direct connection to the natural world.

About the Arc: The Arc San Francisco is a lifelong learning center for adults with intellectual and developmental disabilities serving over 700 clients in San Francisco, Marin and San Mateo counties. Our two art programs, Howard Street and ArtReach Studios, promote the advancement of visual artists from The Arc SF through exploration, education, exhibitions and entrepreneurship. Our artists create fresh, powerful artwork that reveals not only innate ability, but also a point of view that is important and unique in our community. We believe it is important to connect with those who share our vision of promoting inclusion and diversity in our communities through art, and we hope you enjoy our work.

“Protect and Resist” will run September 7th through October 7th.  It is open to the public starting Friday, September 7 from 11am-5pm.   Gallery hours are Friday, Saturday, Sunday and Monday from 11am-5pm and by appointment.  For additional information, please contact hvawsf@gmail.com

WE ARE “OPEN” ONLINE WITH ONLINE WORKSHOPS. GARDEN SITE Currently closed due to COVID-19

Currently closed to public; when we reopen, hours are normally:

Your donation will help us build Hayes Valley Art Works.

Enjoy local thank you gifts and our gratitude.